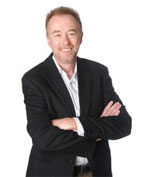 Dr. Adrian Owen has spent the last 20 years pioneering breakthroughs in cognitive neuroscience. Some of his research interests include “brain mapping” in the human frontostriatal system, cognitive deficits in patients with Parkinson’s disease, and detecting residual cognitive function in people in a vegetative state and related consciousness disorders.

His work has been published in prestigious journals such as Nature, The Lancet, Science and The New England Journal of Medicine.

Before assuming his position as a Canada Excellence Research Chair at The University of Western Ontario, Owen was a senior scientist and assistant director of the Medical Research Council’s Cognition and Brain Sciences Unit, Cambridge. His work there, and at the Wolfson Brain Imaging Centre at the University of Cambridge, used functional neuroimaging to explore attention, memory and control in brain-injured patients and healthy volunteers.

Building on his earlier, groundbreaking discoveries, Owen will test new theoretical models and use functional neuroimaging (fMRI) approaches to detect and measure activity in brain-injured patients who appear to be entirely vegetative. He will also develop new brain-computer interfaces that will allow these patients to communicate with the outside world and will expand their possible choices for therapy. These pioneering techniques offer a new window into the consciousness of some brain-injured patients.

Owen will also study the cognitive deficits (problems in perceiving, thinking, reasoning and remembering) in patients suffering from neurodegenerative diseases such as Parkinson’s, Huntington’s, Alzheimer’s, and amyotrophic lateral sclerosis (ALS). Drawing on existing expertise at The University of Western Ontario in genetics, cognitive neuroscience, neurology, and brain imaging, Owen will explore the nature and causes of these eurodegenerative diseases, with the goal of improving their early detection and treatment.

His research program encourages links between neuroscientists, biomedical engineers and clinicians, and provides a myriad of new opportunities for both research and industry. Moreover, his work will improve health care delivery for brain-injured patients across Canada, affecting diagnosis and clinical care, medical ethics, and medical and legal decision-making about life after severe brain injury.

Many of Dr. Owen’s articles are available for instant download as PDFs on his web site.