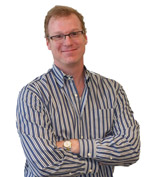 Michael L. Anderson’s research is located at the intersection of psychology, neuroscience, computer science, and the philosophy of cognitive science, and has appeared in venues including Artificial Intelligence, AI Magazine, Behavioral and Brain Sciences, Connection Science, Journal of Cognitive Neuroscience, NeuroImage, The Neuroscientist, Philosophical Psychology, Synthese and Topics in Cognitive Science.  His most recent book After Phrenology: Neural Reuse and the Interactive Brain (MIT Press, 2014) outlines a novel framework for understanding the overall functional organization of the brain, places its function in evolutionary context, and demonstrates how mechanisms originally evolved for the support of sensory-motor coordination have been coopted to facilitate language and mathematics. Anderson was a 2012-13 Fellow at the Center for Advanced Study in the Behavioral Sciences, at Stanford University.

Much of Dr. Anderson’s most recent work has focused on understanding the functional structure of the brain from within an evolutionary context. In particular, he has been uncovering evidence for the evolutionary and developmental importance of neural reuse, a process whereby parts of the brain are used and reused in multiple circumstances—in different dynamic coalitions—to support perception, action and cognition.  This work first drew widespread attention as a result of a Behavioral and Brain Sciences target article (“Neural reuse: A fundamental organizational principle of the brain”), and the project has continued to move the work forward both philosophically and empirically. For instance, “Mining the brain for a new taxonomy of the mind” reflects on some of the possible implications of reuse for the reforming taxonomy of psychology; “Beyond componential constitution in the brain: Starburst amacrine cells and enabling constraints” offers a case study of the Starburst Amacrine Cell (a neural cell found in mammalian retina), and calls for some specific reforms of the Craver/Bechtel model of mechanistic explanation in light of the way function arises from structure in this case; “Allocating structure to function: the strong links between neuroplasticity and natural selection” lays out in detail the current status of the modularity debate, and offers a novel framework for understanding brain evolution and development in light of neural reuse; “Describing functional diversity of brain regions and brain networks”  develops methods for capturing and quantifying the functional diversity of the brain; and “Beyond the tripartite cognition-emotion-interoception model of the human insular cortex” applies these methods to large repositories of fMRI data to paint a nuanced functional picture of the human insula.

The investigation of neural reuse grew naturally out of an interest in embodied cognition, at least one thread of which has focused on the influence of evolutionarily older perception-action systems on “higher” cognitive functions including language, logic, and mathematics.  Over the past few years, Dr. Anderson has been working to integrate the main findings of, and the particular evolutionary perspective exemplified by the embodied cognition movement, with the evidence for neural reuse. The result of that effort is After Phrenology: Neural Reuse and the Interactive Brain, a monograph released by MIT Press in December of 2014.  The book offers an ecological and evolutionary framework for understanding the brain and cognition. It describes some of the empirical methods that can be brought to bear on the project of reforming the taxonomy of psychology (in fact, it offers a number of empirical reforms, and lays out a specific research agenda for the cognitive neurosciences more generally). And it offers the outlines of an action-grounded, embodied theory of natural language—a cognitive ability widely believed impossible to adequately treat from within embodied cognition framework.

Anderson, M.L. & Finlay, B. (2014). Allocating structure to function: the strong links between neuroplasticity and natural selection. Frontiers in Human Neuroscience, 7: 918.

Anderson, M.L. (2007). The massive redeployment hypothesis and the functional topography of the brain. Philosophical Psychology, 21(2): 143-174.