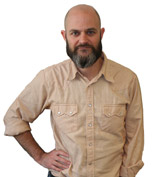 My research engages with a variety of issues that fall at the intersection of the philosophy of mind and the sciences of the mind.

I have also contributed to a number of debates in the philosophy of psychiatry, focusing in particular on the nature and etiology of delusion.

On the axiomatic foundations of the integrated information theory of consciousness Bayne, T. J., 2018, In: Neuroscience of Consciousness. 4, 1, p. 1-8 8 p.