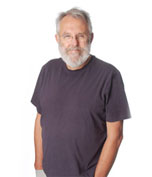 Although he was born in England, Prof. Goodale was educated entirely in Canada. After completing his Ph.D. in Psychology at the University of Western Ontario, he returned to England where he worked as a Postdoctoral Fellow at Oxford University with Professor Larry Weiskrantz. After two years at Oxford, Prof. Goodale accepted a position in the School of Psychology at the University of St. Andrews in Scotland. After six years at St. Andrews, Prof. Goodale returned to Canada when he was offered a post at the University of Western Ontario, where he now holds the Canada Research Chair in Visual Neuroscience in the Department of Psychology and the Department of Physiology and Pharmacology.
In addition to his research activities, Prof. Goodale has been active in developing the graduate program in Neuroscience at Western, for which he was awarded the prestigious E.G. Pleva Award for Contributions to Teaching in 1994. Prof. Goodale serves on the editorial board of a number of journals including Experimental Brain Research, Neuropsychologia, Proceedings of the Royal Society B, and Mutisensory Research. He is the past-President of the Association for the Scientific Study of Consciousness. In 1999, he was awarded the D.O. Hebb Award by the Canadian Society for Brain, Behaviour, and Cognitive Science in recognition of his distinguished scientific achievements. Western awarded him the Hellmuth Prize for Research and also made him a Distinguished Professor.  He is a Fellow of both the Royal Society of Canada and the Royal Society (UK), and most recently, was made a Fellow of the Royal Society of Biology (UK).
Prof. Mel Goodale is one of the world’s leading visual neuroscientists. His early work, in which he demonstrated that the visual control of action is functionally independent of visual perception, laid the foundation for the ‘duplex’ account of high-level vision which he developed later, together with his long-time colleague, David Milner (now at Durham University). This account provides a convincing resolution to conflicting accounts of visual function that has characterized work in the field for the last one hundred years. Over the last decade, Goodale has led much of neuroimaging and psychophysical research that has refined and extended the two-visual-systems proposal. These ideas have had an enormous influence in the life sciences, medicine, and philosophy. The two-visual-systems proposal is now part of almost every textbook in vision, cognitive neuroscience, and psychology.

Prof. Goodale’s research program is funded by the Natural Sciences and Engineering Research Council of Canada, the Canada Foundation for Innovation, the Ontario Research Fund, and the Canada First Research Excellence Fund. He was the Founding Director of Western’s Brain and Mind Institute and is Interim Director of the new Western Institute of Neuroscience.  Along with Prof. Adrian Owen, he founded the Azrieli Program in Brain, Mind and Consciousness for the Canadian Institute for Advanced Research.