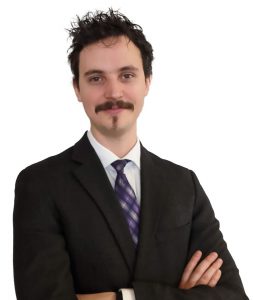 I am a third-year PhD student in the philosophy program at Western University studying under Dr. Michael Anderson. I also am a member of the EMRG Lab, where I develop VR experiments, lead a research project on unified behaviour in split brain subjects, and participate in an ecological social psychology research group. Before that I received my MA in philosophy from Western University, and a combined BSc in psychology and computer science from the University of Victoria.

I’m interested in developing new ways of thinking about what psychological beings are. My strategy is to draw on eclectic, often neglected historical theoretical works (principally from the American pragmatists, functionalists, and ecological psychologists) and see if they can be used to make sense of empirical phenomena that have resisted explanation (such as spontaneous compensatory behaviour in split brain subjects and the persistence of voluntary and habitual phantom limb movements). I also interested in the ethics of “person-building” projects in artificial intelligence. While there has been much discussion of the potential consequences and societal impacts of artificial intelligence, not much attention has been paid to the ethical status of the pursuit itself. Are there good reasons to create artificial persons? Are there good reasons not to? I am interested in intrinsic reasons for or against this endeavour, as opposed to instrumental ones.

When we see other people or animals behaving, we cannot help but see their movements as purposive. We don’t just see movements, but attempts-to and strivings-towards. Furthermore, we do not merely see that their behaviours are purposive, but we can often see with acuity what those goals are. It is crucial that we do—consider the case of other people (Is that person moving towards me with hostile or friendly intent? What did they mean by that wink? ) The question is: How do we predict what others will do, and understand why they do it? This is the problem of mindreading.

Beginning with their 1955 paper “Perceptual Learning: Elaboration or Differentiation?” James and Eleanor Gibson began to develop a radically divergent theory of perception. In this paper, they contrasted two approaches to perception. Enrichment theories state that perception is a matter of receiving some impoverished stimulus—say, patches of light transduced to a pair of retinal image streams—and then adding to, modifying, or interpreting it with the use of concepts, schemas, unconscious inferences, or some other elaborative mental process. Differentiation theories, on the other hand, assume that all of the richness in perception is out there in the world, and the job of a perceptual system is to tune itself to this pre-existing richness.

According to this distinction, it is clear that dominant approaches to mindreading have all been enrichment theories. The most prominent approach to this problem—the Theory Theory of Mindreading—has it that we all possess a theory of what people are like and how they work. When we see people acting, we apply this theory and infer others’ mental states. Another prominent approach has it that when we see others behaving, we simulate their minds using our own as the model. This is the Simulation Theory of Mindreading.

My work extends this Gibsonian differentiation theory of perception into the domain of social psychology. I will develop an alternative Gibsonian account of mindreading. This approach will be given in three parts. First, rather than identify goals and intentions with unobservable mental processes, it will define them in terms of real, directly observable regularities in peoples’ behaviour. For instance, if someone is really trying to get your attention, they will persist in their attempts, despite failures. They will also be flexible in their attempts, meaning they may try to get your attention by different means. They will also be economical, tending to choose the easier and less effortful means first.

Second, I will describe the information available to the perceiving animal which specifies these goals. We often are able to see what people are trying to do on the basis of just a brief glimpse. I will address, in a general way, this question: how much information is enough to specify the presence of goals in another’s behaviour? Third, I will describe the ways in which we tune ourselves to this information. In what ways do we seek out, explore, and attend to this information? One merit of this approach is that it would give us a way to probe what others are trying to do by telling us explicitly what to look for in their behaviour. This applies to humans, but it could also be applied to nonhuman animals, and even artificial beings like robots.

One motivation for this philosophical project is to offer a theoretical framework for doing empirical work in ecological social psychology—a discipline that is just beginning to emerge. It could also help us develop assistive technologies that can detect our goals and help us achieve them.

An Ecological Approach to Temptation

(2020). A Gibsonian Approach to Purposive Behaviour. Annual Meeting of the Society for Philosophy and Psychology, Princeton NJ, United States (Postponed due to Covid)

(2019). Embodiment and the Split-Brain: an Enactive Unity. Annual Meeting of the Association for the Scientific Study of Consciousness, London, Canada. With Michael Anderson.