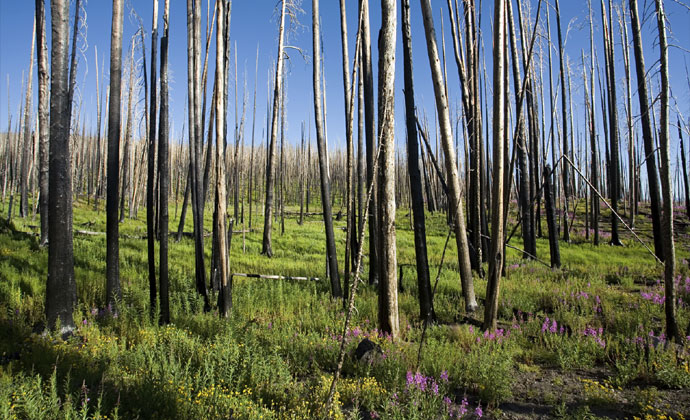 This project looks at the implications of recent conceptual and theoretical changes in ecology for the more applied branches of ecology, like conservation and restoration ecology. Four research axes are developed: 1) Changes in the representation of nature in contemporary ecology: non-equilibrium or path dependence? 2) What is resilience thinking and why is it a better approach to sustainability? 3) Environmental decisions in complex and unpredictable situations: the need for robustness analysis and 4) The problem of defining what is worth preserving and restoring.

1. Changes in the representation of nature in contemporary ecology: Non-equilibrium or path dependence?

Despite its young age, the scientific discipline of ecology has undergone several conceptual and theoretical shifts (Cuddington and Beisner 2005, Cooper 2003, Kingsland 1995). Some have suggested that ecology went from an “equilibrium” to a “non-equilibrium” paradigm in the last decades. Pickett et al., 2007; Cappuccino 1995; Cooper 2003. But the notion of “non-equilibrium” has been interpreted in various ways and it is not clear that it captures effectively the complexity and range of theoretical and conceptual changes that recently marked ecology. Cooper (2003) for example offers the following characterization of this new (non-equilibrium) ecology: “[it] embraces the importance of history over ahistorical equilibria, contingency over “laws” of population growth and community composition, the uniqueness of actual individuals over the homogeneity of the abstract individual, pluralism over monolithic theory, and chance over determinism.” (Cooper, 2003, 83) Putting all this under the umbrella term “non-equilibrium” is not especially fruitful and explanatory. Although there were some episodes during which the relation to the “non-equilibrium” concept was obvious, what emerged from many of the changes that marked ecology since the 1970s is not a “non-equilibrium” but a “path-dependent” view of ecological processes. This is especially evident from the growing literature in restoration and conservation ecology. A process is path dependent if it admits of multiple possible outcomes at a given instant and if the probability of outcomes at a given instant change as a function of the order of events. (Desjardins 2011) The description of ecological systems in the fields of conservation and restoration ecology fits this definition. Ecological systems are described as having multiple possible regimes (or dynamic equilibria) and it is possible for them to unpredictably shift from one regime to another and get locked into degraded states. (Gunderson 2002; Suding et al., 2004) Although the concepts of “change” and “evolution” are at the heart of this picture, it seems clear that describing it as “non-equilibrium” could be misleading. Taking seriously the view that ecological systems are path dependent has important implications for ecological management. These are developed in the other portions of this project.

2. What is resilience thinking and why is it a better approach to sustainability?

As a response to the realization that ecological systems are more complex and less stable than presumed by equilibrium and succession theories, some ecologists have started to emphasize the importance of looking at the resilience of ecosystems. At first the notion of resilience came as a new way of thinking about stability in ecology (Holling 1973). Instead of referring to the fixity of ecosystems and the speed at which they returned to their equilibrium, “resilience” emphasized persistence and the capacity of ecosystems to maintain their integrity in the face of perturbations. Quite rapidly, conservationists started to endorse the view that we need to understand what makes ecosystems more resilient (instead of stable). With time the notion of resilience gained in popularity and it became surrounded with a certain number of propositions and principles about ecosystems in general. These constitute the main pillars of what Walker and Salt (2006) call “Resilience Thinking.” Among the most recurrent ones we find: 1) that we should get rid of the divide human/nature and start thinking in terms of Social Ecological Systems (SESs); 2) that SESs can exist in alternative regimes, each of them separated by thresholds; 3) that SESs undergo Adaptive Cycles, i.e., they go from rapid growth and conservation to release and reorganization; 4) that it is important to understand how variables interact at different temporal and spatial scales. Resilience thinking thus came to embrace ideas of change and unpredictability. This portion of the project also reflects on what makes Resilience Thinking a good (or better) approach to ecological management, especially from the perspective of sustainability. Clearly resilience thinking does not offer a series of concrete propositions that ecologists and policy makers can use in particular projects. The contribution of resilience thinking seems to reside at a more abstract level. It provides a different way of looking at ecosystems and it supplies a set of heuristics that help practitioners to frame explanations of behaviour of SESs and formulate hypotheses. But in order to be of greater use in conservation and restoration projects, it is important to go beyond abstract and metaphorical descriptions. We need also an operational definition of resilience. How far did ecologists go in this direction?

3. Environmental decisions in complex and unpredictable situations: The need for robustness analysis:

The complexity and unpredictability of SESs make any form of ecological management quite difficult. In order to deal with the great uncertainty inherent to environmental decision-making, conservationists and restoration ecologists have developed an approach called “Adaptive Management” (AM).For many, AM is conceived as a continuous learning process: hypotheses, models, and policies are continuously retuned after “experiments,” i.e., interventions on a given ecosystem. AM increases the capacity to deal with uncertainty because it should allow practitioners to respond to change by the ongoing development alternative policies (or hypotheses) and action plans that can be implemented quickly if needed. It goes without saying that this approach should be applied with great precaution, for intervention in SESs can have serious impacts on habitats and communities. This portion of the project looks at the role of robustness analysis in such process. Weisberg (2005) defines robustness analysis as a method by which to determine which models make trustworthy predictions. If models with different assumptions can lead to similar results, then we have a greater chance to have a robust theory (or understanding) of this type of system, and environmental decisions should be based on such robust knowledge. But a potential problem for this approach is the uniqueness of ecosystems. Some argue that we do not find laws (or general principles) in ecology because each community or ecosystem is unique. Would robustness analysis be a waste of time in such situation? Would it be better to develop models and hypothesis that apply only to particular situations, instead of trying to find more general principles that transcend the details of particulars?

4.The problem of defining what is worth preserving and restoring*

Establishing restoration and conservation targets is a critical step in any restoration and conservation projects. Yet deciding what species and habitats are the good ones to protect or re-establish is not always straightforward. A common approach consists of identifying the “natural” state of an ecosystem. Thus, the objective would be to preserve or restore what is natural. But taking seriously the idea that we deal with social-ecological systems preempts the common view that “natural” is “free of human intervention or influences.” Moreover, some have argued (Ereshefsky 2007) that deciding what counts as natural should not play a significant role in restoration and conservation projects. Another avenue consists in accepting that humankind is part of nature and focus on the notion of “ecosystem health.” The Society of Ecological Restoration International (SER I) for example define ecological restoration as “assisting the recovery of degraded ecosystems with respect to their health.” Definitions of ecosystem health tend to emphasize the ecological aspects of systems, but the International Society of Ecosystem Health (ISEH) recognizes that a more comprehensive perspective should also include human health as part of the definition. But the notion of ecosystem health is still very metaphorical, and it is not clear that ecologists and policy makers can easily find an operational definition that can be used in ecological management projects. Moreover, even if we admit that ecosystems cannot (and should not) be conceived as independent of human activities, it turns out that there is often ambivalence regarding the ecosystem’s health because of the multiplicity of states that ecosystems can achieve. One consequence of this complexity is that designating certain states as being “natural” or “healthy” or “degraded” will require value judgments. Thus, different states will be more or less desirable (instead of natural vs. non-natural).

* This portion of the project is conducted in collaboration with Antoine Dussault from Université de Montréal.

Cooper, G., 2003, The science of the struggle for existence: on the foundations of ecology, Cambridge University Press.

Ereshefsky, M., 2007, Where the wild things are: environmental preservation and human nature, Biology and Philosophy, 22(1)57-72.

“Stability and Laws in Ecological Management,” Workshop on The Governance of Nature, London School of Economics, 2010