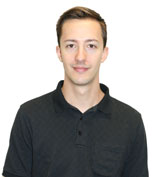 Martin is currently a Doctoral student in Philosophy at Western University. He received his M.A. in Philosophy from Western University. Prior to coming to Western, Martin completed a B.Sc. in Mathematical Physics, with a minor in philosophy, at the University of Waterloo. His research interests focus primarily on philosophical issues in the foundations of thermodynamics and statistical mechanics, in particular the nature of equilibrium and the explanation of the approach to equilibrium. Martin is strongly influenced by W. V. O. Quine’s conception of philosophy as continuous with science. He is keenly interested in the philosophical views of Quine and their implications for traditional problems in the philosophy of science.

My current research is in the foundations of thermodynamics and statistical mechanics. In particular, I am interested in the extent to which we can give a mechanical explanation of the asymmetric tendency for physical systems to equilibrate. I claim that attempts to explain this phenomenon in terms of typicality, combinatorics, ergodicity/mixing, or molecular chaos do not succeed. I advocate for a counsel of despair according to which the tendency to approach equilibrium is a brute fact about the distribution of initial conditions of systems in the universe and not explicable in terms of special features of the dynamics, the structure of phase space or lack of initial correlations. I am also interested in trying to bridge the conceptual gap between Gibbsian methods in statistical mechanics and an individualist conception of thermodynamic systems.